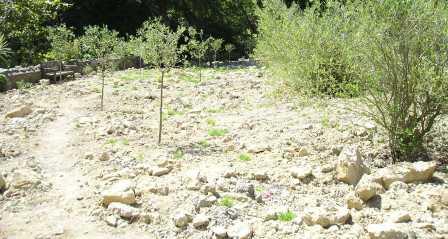 Despite the predation of rabbits and a highly unusual but nonetheless pleasantly dry June, our Olive Grove sub-flora has begun its primary colonisation.

Our Heritage and Botanic Garden Bursary Scheme student, Sara, dedicated the early spring to researching the floral composition of Mediterranean Olive Groves.  Being the owner of one such grove herself in Spain was invaluable, despite this she worked hard to learn the blend of plants she would expect to find in groves throughout the region.  Having made her selection the less aggressive or invasive species were procured and grown on from seed or plants in our nursery, others sown directly in situ.  This initial phase has focussed on introducing the annual, biennial, perennial and shrubby elements.  Later on we will add the bulbous plants Sara identified, and gradually add other plants from her list as the population dynamics reveal themselves.

From experience in our Mediterranean Garden where we pioneered this style of botanic horticulture it will take several years for the plant populations to stabilise and become self sustaining, until that time garden staff will “interfere” with nature, adding or subtracting species and weeding as necessary.

During her research Sara identified a plant familiar from her own Olive Grove not from seeing it but from its scent.  Dittrichia viscosa (above) is actively encouraged in Olive Groves as its flowers are parasitised by the larval stage of an gall forming insect which is itself the prey of another wasp parasite.  These wasps in turn hatch and become the predator of the Olive Fly, an important economic pest of olives.  This is a fascinating food chain.  In cultivation Dittrichia looks different to its native form (an occurance not unusual when plants are grown outside their natural range) but the same scent, particularly when wet, as all too clear. 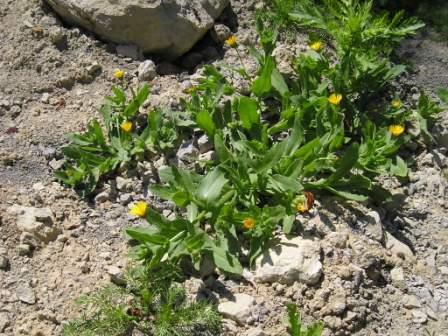 Calendula arvensis (above) is the first to flower of the annual seeds direct sown below the olives.  The substrate is the sandstone mined from just yards away which makes up the natural subsoil below VBG.  Establishment of plants like this require techniques developed for the imitation of wildflower meadows where topsoil is removed to impoverish the soil, this favours the more delicate plants over nutrient greedy weeds.