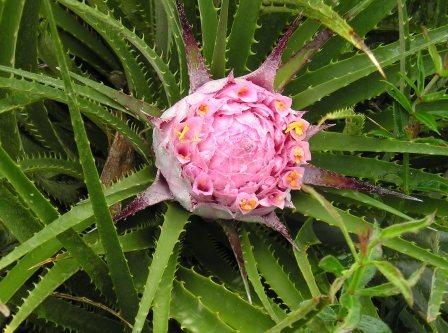 On previous plant collecting trips we have often admired a large group of Ochavagia rosea outside Hardy Exotics Nursery in Penzance.  Proprietor Clive Shilton had never any available for us to purchase until 2007 when he was generous enough to prize of a division from the main plant.  After two years in our nursery it was planted out in 2009 in the Arid Garden and flowered for the first time in 2011, though this is the first time we’ve got round to photographing it.  We are still a few years away from the impressive clump Clive has at his entrance but it is surprising how quickly these will form a large group.  This year there are three top heavy, ball-like inflorescences which are comprised of the bulky pink bracts holding the actual three petalled orange flowers which appear popular with Leopard Slugs. Our other single accession of Ochagavia is Ochagavia litoralis, courtesy of Martin Gardner, RBG Edinburgh.  This is wild source material collected from Chile, the findspot rock crevices of a steep rocky gorge with a small stream in Quebrada Loma, Valparaiso.  Currently in our Nursery this accession will be planted out in the spring of 2014.

We hope to return to the road again shortly and will be seeking out any other hardy Bromeliaceae to add to our collection.