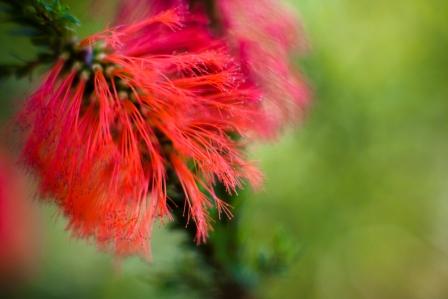 The majority of Australian plants we see in UK gardens originate from the cool high altitudes of South Eastern Australia and, further south, Tasmania.  Beaufortia sparsa, the Swamp Bottlebrush, is native to South Western Australia.  In cultivation it is not often seen, so it isn’t surprising there are conflicting accounts of its cultivation. The common name suggests it is from swamp ground, whereas (albeit sparse) cultivation notes suggest sandy, free draining conditions are essential.  It is not terribly unusual for Australian swamp dwellers to live in the UK in dry positions, for example the Tasmanian Swamp Gum, Eucalyptus rodwayi, does very well with us on a very hot dry bank.  The likelihood is that the swamp conditions in Australia are seasonal, short, and not accompanied with cold as with the British mainland winter.

Our specimen of Beaufortia came from a collection of southern hemisphere plants grown under glass in the Midlands.  As is always the case with specimens needing high quality light, the parent plant was bedevilled with red spider mite, the consequential sooty mould and inevitable chlorosis.  Etiolation leads to sparse flowering, should such an event even be coaxed; more likely the flowering is the last throw of the dice for a plant too sick to live.  Such plants simply fail to thrive, and are never a good advertisement for themselves.  This combination of poor growth in inappropriate conditions and a predetermined dislike for the UK has relegated Beaufortia to the group of plants which most gardens just don’t even try to grow.  Ask yourself, have you seen Beaufortia in a garden?  PlantFinder has two entries, one (defunct) in Ireland.  The UK entry is from the hugely talented Graham Blunt at Plantbase, and he’ll be the first to accede he struggles with it in East Sussex.

All things considered, the likelihood of Beaufortia flowering here would seem remote, more so following the succession of vile winters since 2009.  But, one can never account for the remarkable south facing banks of VBG.  I think we had all assumed the plant in question was a particularly chunky Melaleuca squarrosa until it opened, but then the long, slightly reflexed, (reflexed in the same manner as South African Heaths) flame red stamens gave the game away.  The label has recently been stolen – often the case, light fingered thieves with poor memories – but the accession remained to tell the story.  We anticipate a good seed set and to be offering plants for the discerning gardener with a flair for the unusual in the near future.