Is Brugmansia the New Canna? 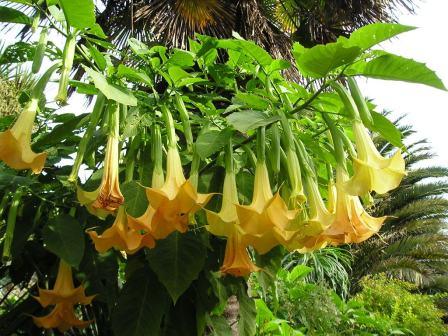 The Canna Bank at VBG is so named because it became where we grew the riot of colour possible from the species and cultivars of Canna.

Canna are well established in English gardens, they are usually treated as half hardy prennials that need to be lifted (and divided) in Autumn before the first frosts and brought indoors to a cool dry position to overwinter, much like the tradition begun with Dahlia tubers and Chrysanthemum stools.  In 2000 we abandoned this practice, in the recognition that at VBG we just don’t get the penetrating frosts that can kill a Canna rhizome.

Being the forward looking garden that we’ve become, we began experimenting, looking for the logical next step for the Canna role, and we decided upon Hedychium, the Ginger Lily.  This was fortuitous, as at the same time a virus was making short work of our Canna culivars and Canna collections all over the UK.  Initially we traeted Hedychium in the same way as Canna were traditionally grown, cut back in Autumn and brought in to over winter.  We soon recognised that this wasn’t necessary for the same reason as the hard work with Canna was redundant, no penetrating frost. So now all our Hedychium, including the very tender H. greenei remain in the ground all year with no apparent damage or limitation to their growth.

Following on from this we have been looking for the next logical step and in 2012 alighted on Brugmansia as successor to Hedychium, having noted that plants of the beautiful species B. sanguinea have grown as herbaceous perennials in our Walled Garden for many years and can reliably be seen in flower on Christmas Day. We collected as many cultivars as possible, bulked them up over winter in 2012 and planted these through the Canna Bank in 2013.  These were overwintered in situ, and died back to their bases during the winter cold.  This spring they begun growing back and are now in flower in October, and should continue to do so right through the autumn.

There are five species of Brugmansia, all from South America, differentiated from the closely related Datura by having pendant flowers.  Between these species are plenty of hybrids and many cultivars selected for flower colour and size.  All the species except B. sanguinea are night scented, and the scent weighs heavy after dark. 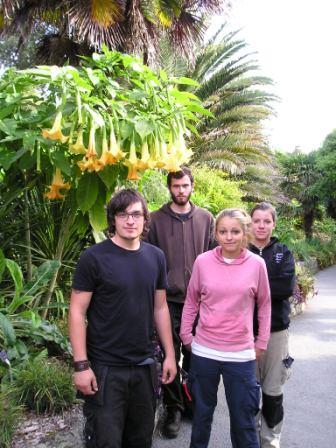 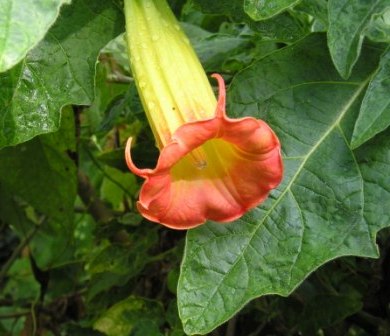 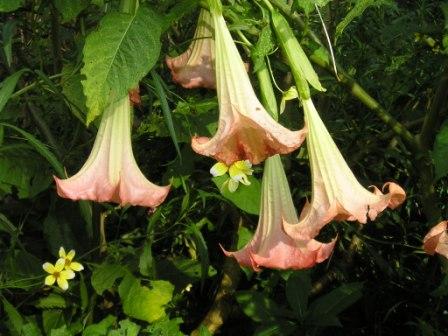 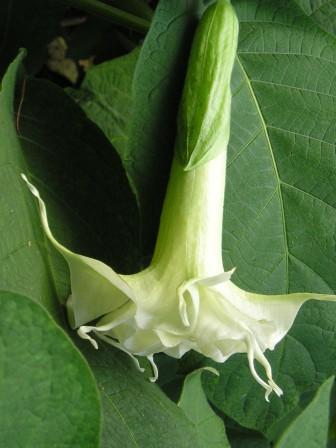