There is a fine display of flowering Dragon’s Arum (Dracunculus vulgaris) to be seen currently in the Mixed Border and the Mediterranean Garden. Some of the plants are remarkably over 2 metres in height! This plant is the most dramatic and eyecatching of the European aroids. It comes from the warmer parts of the eastern Mediterranean, where it grows in undisturbed olive groves and on waste ground. 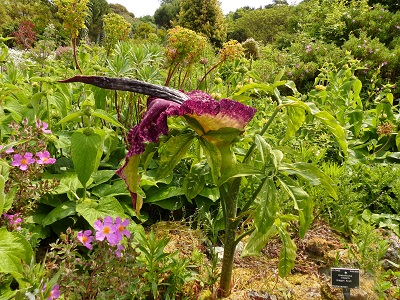 The foliage is attractive but the flower is spectacular. It opens, for a few days only, to reveal a long, dark purple lance shaped spadix enveloped by a huge purple bract or spathe. Inside at the base are a collection of flowers, both male and female, female at the bottom and male above. 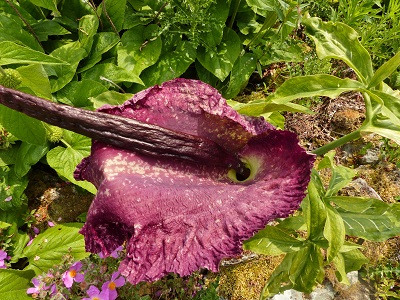 When the flower is ready to be pollinated, it emits a foul smell of rotting meat. This attracts flies which slide down the shiny inner surface into the bottom of the flower where they become trapped for a day unable to crawl back out. During this time, they crawl over the female flowers, dusting them with pollen from earlier traps. Then the male flowers release their pollen over the flies, the flower wilts, and the flies are able to escape…..to another flower!

It seems as though our Dragon Arums are not pollinated by flies but by small Dermestid beetles. Several morning visits of ripe flowers have revealed groups of these beetles climbing up the spadix to make their escape, heavily dusted with pollen. As soon as they are disturbed, they fall back into the flower. Beetles of the family Dermestidae are scavenging beetles feeding on dead carcasses and natural fibres. No doubt the aroma of the Dragon Arum suggests to them that a ready meal is at hand!