Great news in November at the Garden; our latest batch of the South African Red Hot Poker Kniphofia bruceae have begun to flower.  VBG has a nationally renowned collection of Kniphofia including this highly unusual species.  Kniphofia bruceae was originally described over a century ago but disappeared from both gardens and seemingly from the wild until very recently when a lone plant was discovered in its native South Africa, surrounded by a plantation of alien Pines.  Seed from this specimen were distributed, and as a botanic garden with the perfect microclimate VBG has grown this plant for two years.  Our own propagated material has been shared amongst other gardens such as the University of Cambridge Botanic Garden, Abbey Garden Tresco and the Royal Horticultural Society Garden at Wisley, to ensure this species is held safe in cultivation.

It has been suggested that this species of Kniphofia may be self infertile or self incompatible so we are carrying out hand pollinations bewteen the flowers to test this theory and if possible bulk up the plants via seed.  David Kelley from VBG Friends has become chief pollinator.  So far we have a few seed pods that look like they may have set. 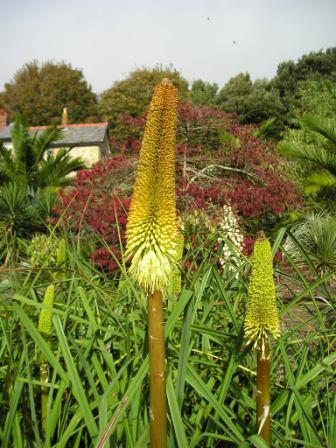