The Giant Waterlily, Victoria spp., is an annual plant grown every year from seed.  Its prodigious growth rate takes it from a pea sized seed to a plant nearly 10m in diameter with leaves able to bear the weight of a child within a few months. 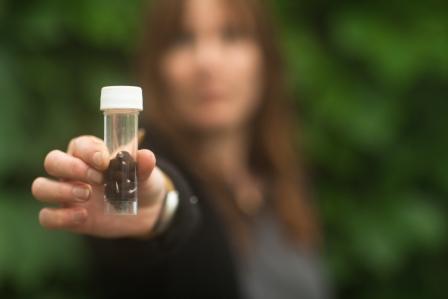 By 29th March the young plants had developed their third leaf.  The first leaf is sub-aquatic and lanceolate (spear shaped), the second is also below the water surface but saggitate (arrow shaped).  The third floats on the surface and is beginning to become fully peltate (plate like): 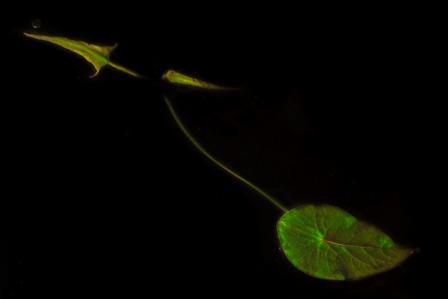 In 2013 it is hoped to grow both species of Giant Waterlily and hybridise them for the first time at VBG.  We have attempted this twice before without success.  We hope for the third time lucky in 2013.

Victoria amazonica was planted in the Main Pool on 23 April.  As of 9th April three new leaves have emerged indicating the plant is establishing.  On 2nd May a single Euryale ferox was planted by Sara in a smaller container,  Euryale ferox is the Asian Giant waterlily, it tends to very very fast growing and will complete its life cycle before the two Victorias.  The Victoria cruziana seedlings are nearing the planting stage, this week we will move them into the Main Pool to acclimatise.

Ventnor Botanic Garden is delighted to announce an exciting, new botanic project, involving the crossing of two species of Giant Waterlily. The aim is to hybridise an un-named cultivar of Victoria amazonica with the Victoria cruziana in order to produce a new hybrid.

VBG has grown the Giant Waterlily; which is an annual plant grown from seed, since 2002. However, this is the first time we are hoping to grow both the V.amazonica andV.cruziana species and hybridise them.

The seed was sown on March 3rd 2013 and so far we have one V. amazonica seedling and three V. cruziana seedlings. Our aim is for the new hybrid to possess the better characteristics of both its parent plants.

These plants only flower late at night so VBG will be holding special events in the Tropical House for visitors to come and see this unique plant and to enjoy its rare and beautiful flowers.

More about the Giant Waterlily:

The Giant Waterlily, Victoria spp has such a remarkable growth rate, it develops from a pea sized seed to a plant, with lily pads nearly 3m in diameter; within a few months, it is even able to bear the weight of a child!

Each individual flower only opens twice. On the first night the flower is white in order to attract scarab beetle pollinators. The beetles are attracted to the whiteness of the petals and the strong scent the flower produces.  At this stage the flower is receptive female.
Over night, the flower closes which traps the beetle inside. The flower then changes its sex, and releases pollen onto the imprisoned beetle.
On the second night the flower opens again, but this time it is pink in colour. The beetle is freed from the flower and free to move onto another plant, again attracted by the white flower and strong scent. Pollination is complete and the lifecycle of the lily starts again.

Chris said, “Very few gardens are able to cultivate a single Giant Waterlily, even fewer can grow both.  At VBG this year we hope to grow both and hybridise them which to my knowledge has not been done since I did it at Kew in 1994.  Seed from that cross were used throughout the UK for many years, we hope to achieve that same goal here.  This puts less pressure on wild stocks of the lily.”