4Magnolias are well known as the earliest flowering trees each year at VBG
and it is a definite sign that early spring is just around the corner! 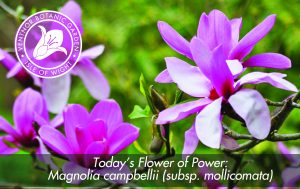 Our Magnolia campbellii Alba are from the western Himalaya, (Nepal to Assam) and are always the first to open. Usually we have to wait much longer to see its darker relative from further east (nearly as far as Burma), the Magnolia campbellii subsp. mollicomata, to flower. However this year all our Magnolias are opening very early as a result of the exceptionally mild conditions and both can be seen. The latter is this weeks Flower of Power. 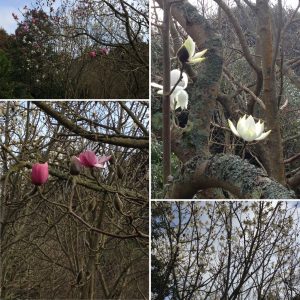 Magnolia’s are named after French botanist Pierre Magnol and are thought to have appeared on Earth in early prehistoric times, with the fossil record showing them dating back nearly 95 million years. This was before even bees lived on the planet and it is commonly theorised that magnolia flowers evolved originally to be pollinated by beetles instead.