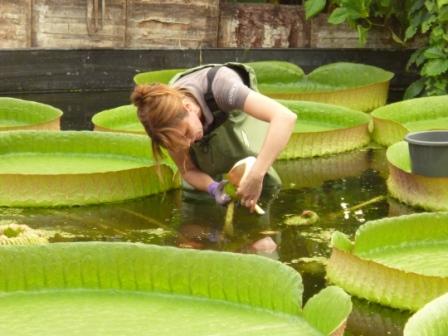 Flowers of the new Giant Waterlily hybrid made at the garden last summer have begun to open.  Uniquely at VBG we used an un-named cultivar of V. amazonica as the father plant, so our hybrid is entirely new.  A bicolour flower trait that distinguished the father plant has been inherited in our new hybrid, Last year we are grew both of the parent species, Victoria cruziana and V. amazonica, with the intention of hybridising the two.  VBG student Sara Limb (above) prepares to remove pollen from Victoria cruziana This cross was first made by two German doctors studying the cytology of the plants in the early 20th century but their cross wasn’t formerly named.  It wasn’t until Pat Nutt made the cross at Longwood Botanic Garden in the 1960s that the cross became named Victoria “Longwood Hybrid”.  It wasn’t until 1996 that the hybrid was made in the UK, at RBG Kew,a feat that has not been achieved since.

The timing of flowering is crucial as the flowers last for two nights and change sex during the day inbetween.  On the first night the white flower is a receptive female, the second night it has changed to red and become male.  Therefore we need the V. amazonica to be a red, second night male flower to coincide with a V. cruziana female white flower.

Pollination takes place late at night when it is dark, we have to light the scene in order to see inside the complex flower.

New for 2014, join us and see the amazing Giant Waterlily flower at night, email info@botanic.co.uk for details.