After its summer walkabout the kangaroo has come back 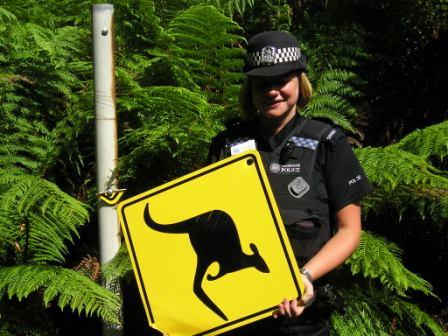 The VBG kangaroo went “walkabout” earlier in the summer when it was stolen from the garden, but it has been returned by the police following a tip off.  The distinctive yellow sign, seen above held by PC Woodgate, was fixed to a post to intrigue visitors to our Australian Section of the garden which closely resembles the flora native to New South Wales.
An observant member of the public saw the ‘Roo hanging from a garden wall in Ventnor at the home of a teenager who had found the sign discarded along the coastal path.  Staff at the garden contacted the police who were pleased to reunite the  sign back to its original position.