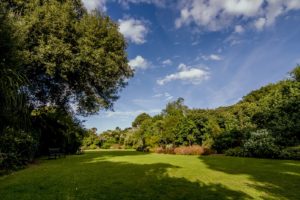 A development started in the spring of 1989 in the wake of the total destruction caused by the storm in 1987. The original plantings were made to represent a thicket of New Zealand bush. Some cultivated varieties have been introduced latterly. Many of the plants here are of unknown hardiness but are potentially useful for British gardens.

The flora of New Zealand is rich and unique having evolved in isolation for millions of years; because of this it has a distinctive look about it. No fewer than 80 per cent of New Zealand’s native plants are endemic, ie, occurring there and nowhere else. Although few have showy flowers the variety of foliage colour, texture, and shape is unsurpassed.

So many commonly grown garden plants herald from New Zealand. Brachyglottis (formerly Senecio), Hebe, Olearia and Phormium to name but a few. Seldom are they grown in association with other natives of New Zealand, but here the opportunity to see them as a geographic entity creates an impression of the flora of that far distant land.

Climatically New Zealand is more akin to the Mediterranean than Britain, but the numerous microclimates caused by the topography there means that there are many plants that cope well with our northern temperate clime. Many of New Zealand’s plants that we grow come from areas of high rainfall. These plants thrive at Ventnor not so much because of rainfall but due to the relative humidity that is kept high by close proximity to the sea. Mist and fog being frequent in the spring and autumn months play their part in maintaining good growth on the New Zealand collection. The potential use of New Zealand’s plants for gardens, particularly in the more favoured regions of the UK, is graphically illustrated by the collections here.

The first ten years in the development of the New Zealand collection has surprised us greatly; primarily in the speed of growth of many of the plants and also the huge diversity of species that it has been possible to cultivate. It was anticipated that there would have to be a cycle of removal and rejuvenation to maintain a diverse and active collection. However the time frame in which this cycle needs to be undertaken is considerably shorter than expected. It must also be stressed that the experimental nature of much of this planting does sometimes lead to unexpected result both of success and failure.