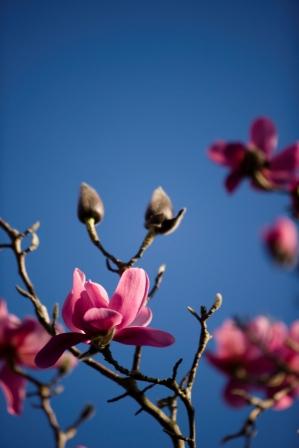 Magnolia campbellii were discovered in the Himalayas and brought back to the UK during the 19th century. They were destined to change the face of British gardens forever. The tree arrived along with an avalanche of new introductions brought to the British Isles in 1868 by Joseph Hooker junior who succeeded his father as Director of Kew Gardens. Having been named by Hooker in honour of Dr. Archibald Campbell, Political Resident at Darjeeling, India, plants were quickly dispatched to the burgeoning estates in the milder Gulf Stream washed climes of Cornwall, Ireland and Scotland. Magnolia campbellii is a slow growing tree often needing more than 30 years to flower, but when they did they became sensations in the horticultural world. Their blooms graced shows of the Royal Horticultural Society and they became forefathers and mothers of graceful and beautiful cultivars, themselves named in honour of the estate owners whose staff bred them. 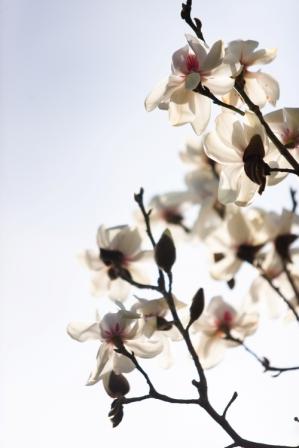 As large estates diminished following the first World War new homes for tree Magnolias were in short supply in their preferred mild locations. Gardens generally have progressively shrunk, thus there have been diminishing prospects for new plantings for these fascinating giants. Today, the Victorian introductions are fair comparators to their kin in the wild; they have become very large trees. Think of the stature of the London Plane and you will have an idea of how large they can become. On visiting these behemoths one is confronted with a huge trunk, the flowers held in excess of thirty or forty feet above the ground.

The Maritime climate is very suited to the large Magnolia, in Britain they flower early in the year at a time when frost still reigns supreme, and will turn newly open blooms brown in bright morning sunlight. Therefore the prospects of a slightly east facing garden with salt laden winds – on a shallow alkaline soil to boot – are not good for these trees. Certainly Sir Harold Hillier, who himself had a M. campbellii from the Alba Group named after him, did not see Ventnor as a site for them. Fortunately his successor, Simon Goodenough, saw things differently. He planted a small group in a sheltered position which offered itself as available following the great autumn clear-out afforded by the Great Storm of 1987. These trees left juvenility early in their lives and began flowering in the late 1990s. 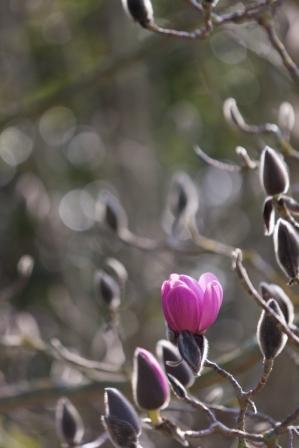 We have been recording the flowering times of these Magnolias diligently ever since and it has been possible to see patterns emerging in relation to the type of winter we experience. A “usual” winter at VBG, where we have a mild start to the winter with a short cold snap around Christmas sees the first white M. campbellii var alba open in the first fortnight in January, with the redder cultivars opening two or three weeks later. Recent colder winters have pushed the first opening back into February. Our coldest winter for 30 years saw them open in March in 2010. Prior to this year the most interesting so far has been a pre-Christmas flowering in 2011 which followed an autumn where the temperature never went below 5ºC, but these early blooms where destroyed when a low pressure sat over Spain and pulled arctic cold down over us in February. This caused the Magnolias to start all over, but not until the first week of March. In 2016, following an Autumn where no frosts were recorded even on the Mainland, the Magnolias began to open on Christmas Eve and continued unchecked into full bloom from then onwards into January. In 2017 the Magnolias have begun to bloom on 5th February, quite late despite the mild winter.

In 2013 snow was recorded for the second time in 30 years at VBG, on 18 January, and endured for one day. Two air frosts were recorded for the month, neither persisted through the following day.

The 2013/14 winter proved to be the mildest, wettest and windiest winter in living memory. December 2015 has been the mildest since the mid 19th Century. the winter of 2016/17 has been mild too, though some ground frosts were recorded and snow laid (mometarily) in January in Ventnor. As of 6th January 2017 we’ve not had an air frost for over four years, the last recorded on 18th January 2013.

In 2016 our first M. campbelli var alba opened before the end of the year on 24th December.