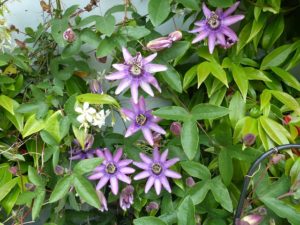 In the Mediterranean garden the bushes of Oleander, Nerium oleander, are flowering spectacularly this year. In most years, only a few flowers open but this year they have really responded to the hot weather.  There are bushes bearing pink flowers and another with white flowers. Oleanders are highly toxic ornamental shrubs widely cultivated in the Mediterranean. They have been grown since ancient times and feature in many of the Roman wall paintings in Pompeii. Alexander the Great in his military campaigns is said to have lost men as a result of eating meat skewered on the highly poisonous twigs.